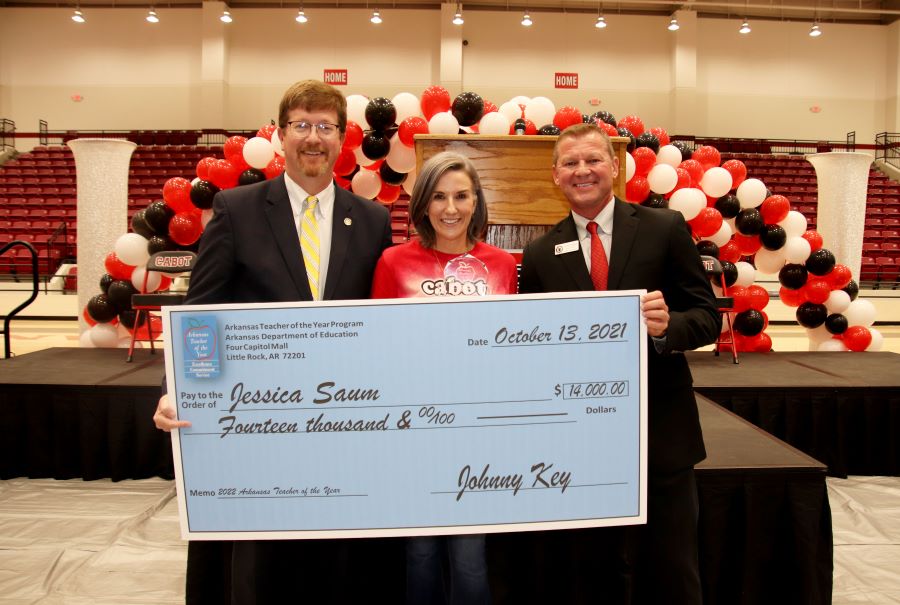 Mrs. Saum is a special education teacher at Stagecoach Elementary and was one of four state semi-finalists. She thought her school was just attending a "Reading Rally" pep rally at Panther Arena to celebrate its One School, One Book program. Instead, she was surprised to learn the celebration was also for her! 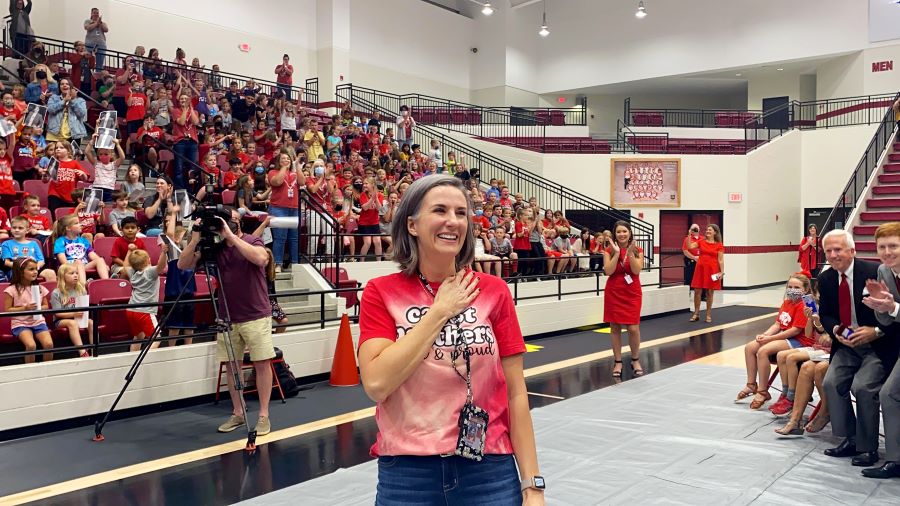 Mrs. Saum is a huge military advocate for children. Her husband is currently deployed to Portugal and was able to see the celebration through facetime. He even sent a special video message as did Governor Asa Hutchinson. 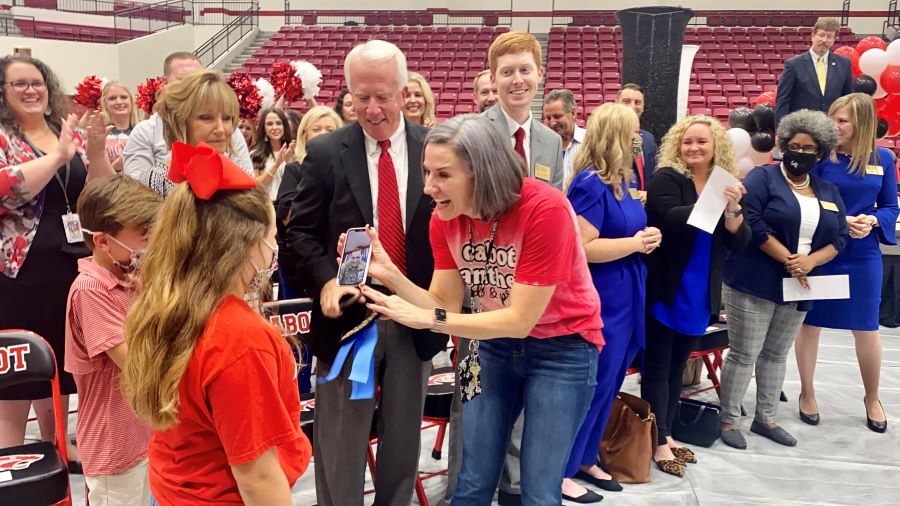 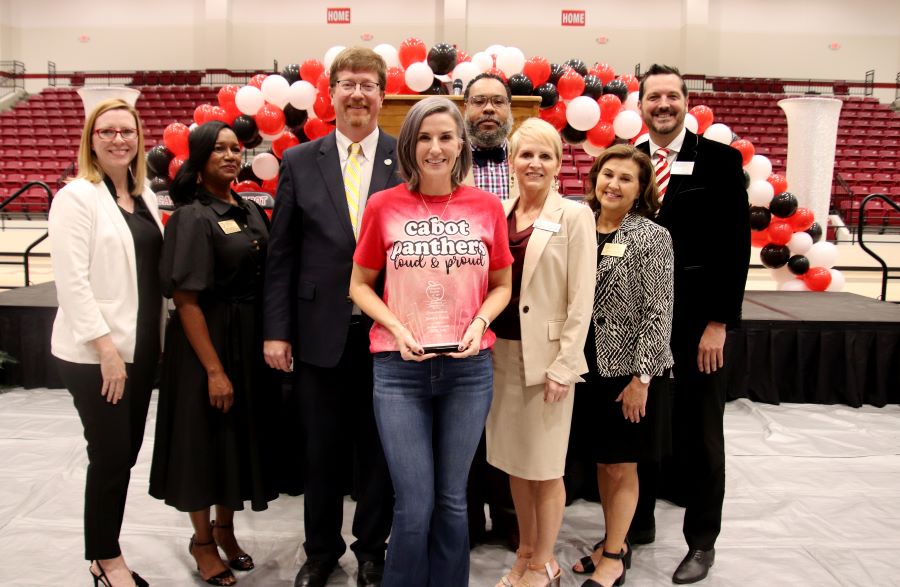 A special thank you to everyone who made the surprise so special for Mrs. Saum and her family. Her parents even flew in from out of state. Also,  thank you to all the dignitaries, lawmakers, school board members, officials, and education leaders for their support, as well as, the countless students and staff members for making this a memorable event! 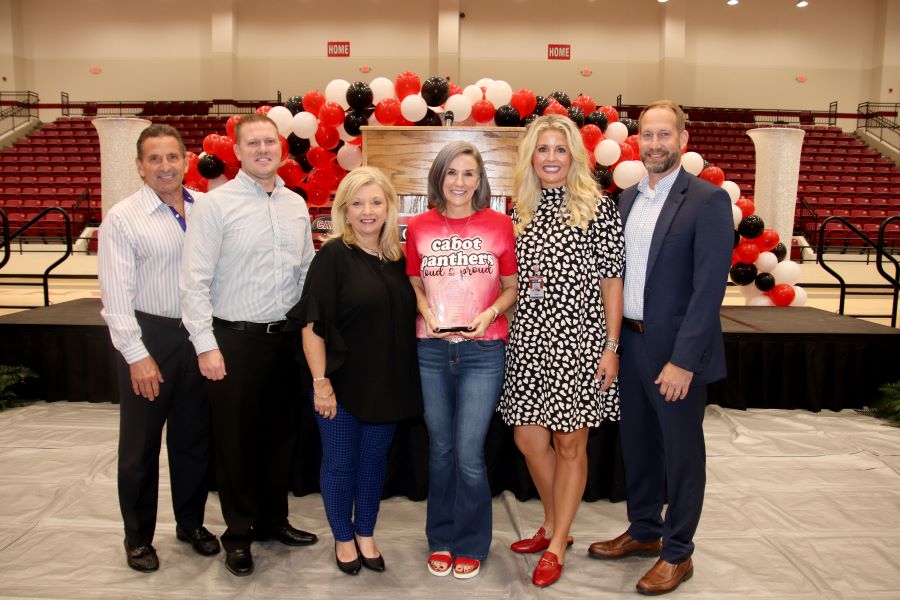 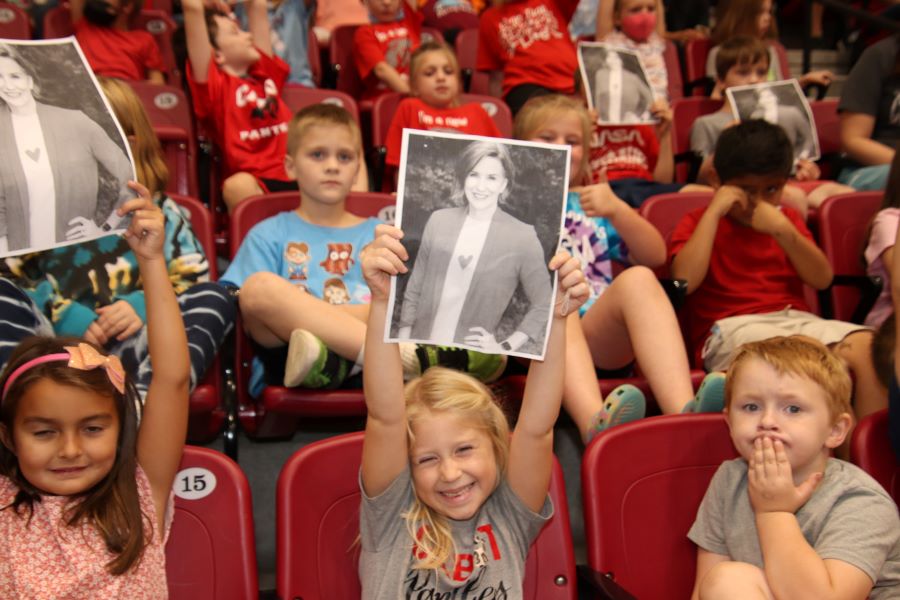 Mrs. Saum was awarded a $14,000 prize and is now eligible for National Teacher of the Year. Congratulations Mrs. Saum on your well-deserved recognition.

LITTLE ROCK — When Jessica Saum, a special education teacher at Stagecoach Elementary School in Cabot, woke up this morning, she knew she was one of four Arkansas Teacher of the Year state semi-finalists. What she didn’t know until a surprise ceremony this afternoon, however, was that she was in fact selected as the 2022 Arkansas Teacher of the Year.

Saum, who has been a self-contained special education teacher for grades K-4 in Cabot since 2018, is known not only for her excellence in the classroom but for her advocacy work on behalf of her students, her efforts to connect her students with learning opportunities in the community, and her support for military families.

“For successful students, there are numerous exceptional teachers who help them on their journey of life,” Gov. Asa Hutchinson said. “Based on her track record both in and out of the classroom, Ms. Saum definitely falls in that category and represents the best of the best in Arkansas. Not only do her students and fellow teachers know that, but as the 2022 Arkansas Teacher of the Year, now the rest of the state does too. I am honored to recognize Ms. Saum for her excellence in the classroom and congratulate her on this high honor.”

“As secretary of education, I am humbled and honored each year to be part of an amazing event that recognizes an outstanding teacher such as Ms. Saum,” Arkansas Department of Education Secretary Johnny Key said. “It always brings me joy to see a teacher receive the much-deserved recognition that is long overdue. I commend Ms. Saum not only on her dedication to her students and community but also for her sacrifice and service as the spouse of a military serviceman. She understands firsthand the commitment it takes to balance work and life and whole-heartedly support your family, students, and country at the same time. Thank you, Ms. Saum, for all you do. This honor is well-deserved, and we at the department look forward to working alongside you when you begin your tenure as the next Teacher of the Year.”

Saum was not only named the 2021 Cabot Public Schools Teacher of the Year, she also was recognized as the 2020 314th Airlift Wing Key Spouse of the Year for her volunteer work at the Little Rock Air Force Base. As Teacher of the Year, Saum will use her platform to focus on increasing awareness and improving resources for districts who assist students of military families when they transition to a new school and state.

Inside the classroom, Saum regularly partners with other teachers and community members to bring hands-on lessons that cross multiple content areas to her students, as well as provide opportunities for her students to learn in general education classrooms. For example, in addition to partnering with a gifted and talented teacher on a lesson about earthworms, Saum also collaborated with the 314th Airlift Wing at the Little Rock Air Force Base to take her students on a virtual C-130 field trip. She has partnered with Ballet Arkansas to have a sugar plum fairy in full costume read The Nutcracker to her school via Zoom and has organized a class outdoor camping day event for her students. She also planned a school-level Special Olympics event for students in May.

Saum’s passion for her students’ learning is evident. “Special education students should not be treated as ‘guests at the table’ but included as meaningful members of a larger learning community,” Saum said in her Teacher of the Year application. “Ensuring exposure to grade-level peers and curriculum should be the standard, not the exception."

Prior to teaching at Cabot, Saum was a preschool teacher at the former Arnold Drive Elementary School in Jacksonville, as well as a long-term substitute in early childhood special education in the Pulaski County Special School District.

In addition to receiving a $1,000 prize when named a regional finalist and an additional $1,000 for being a state semi-finalist, Saum received an additional $14,000 award today sponsored by the Walton Family Foundation. She is now eligible to apply for the National Teacher of the Year honor.

Saum’s one-year tenure as Arkansas Teacher of the Year will begin July 1, 2022, when she will travel the state as a representative for teachers and will serve as a non-voting member on the State Board of Education.

To learn more about the Arkansas Teacher of the Year program, visit https://bit.ly/3Dmhf5S.