It was a memorable night, Friday, May 20th, as 715 walked across the stage at Simmons Bank Arena once again in North Little Rock to accept their diplomas. Thousands of family and friends watched their cheered on their favorite graduate.

This senior class also has three National Merit Scholars, 24 Governor's Distinguished Scholars, three service academy appointments, over $147,000 in scholarships given by businesses, organizations, and individuals in our local community, more than half-a-million-dollars given in band, choir, and athletic scholarships, and millions of dollars in academic scholarships!

Valedictorian Caroline Huynh has attended Cabot Public Schools since PreK. She has 13 AP credits and is graduating with a 4.58 GPA.  Caroline is involved in the Cabot High School’s Visual Arts Department as both an AP art student and the president of both the Art Club and National Art Honor Society. Alongside her dedication to the arts, she is also a member of National Honor Society, Mu Alpha Theta, and AP Academy. She has received recognition for her efforts in extracurriculars, community service, and academics. She is one of only 20 students across the state who were selected as an Arkansas Times Academic All-Star.  She is an Arkansas Governor’s School Alumni, an AP Scholar with Distinction, and an Arkansas Governor’s Scholastic Honor Student. Caroline has been offered both the Governor’s Distinguished Scholarship and the Jerry and Linda Waymack Scholarship and will be attending Rice University in Houston, Texas on a full scholarship to study biosciences or nanotechnology.

Co-Salutatorian Dwyneth Gutierrez is graduating with 12 AP credits and a 4.53 GPA. Jade has been a STEM focused student, reaching double completer status for both Engineering and Computer Science pathways. She’s been on the Technological Student Association Robotics team since the 10th grade, and is currently the club’s president. She is also the president of Junior Civitan Club, the Secretary of National Technical Honors Society, and a member of National Honors Society, STEM Club, and Mu Alpha Theta. She is honored by the state as a Scholastic Honor Student of Cabot High School presented by Governor Asa Hutchinson. Jade is recognized as a QuestBridge National College Match Finalist through which she received a full scholarship of $350,000 to attend Washington University in St. Louis. Jade plans to double major in Computer Science and Computer Engineering at Washington University in St. Louis - James McKelvey School of Engineering. 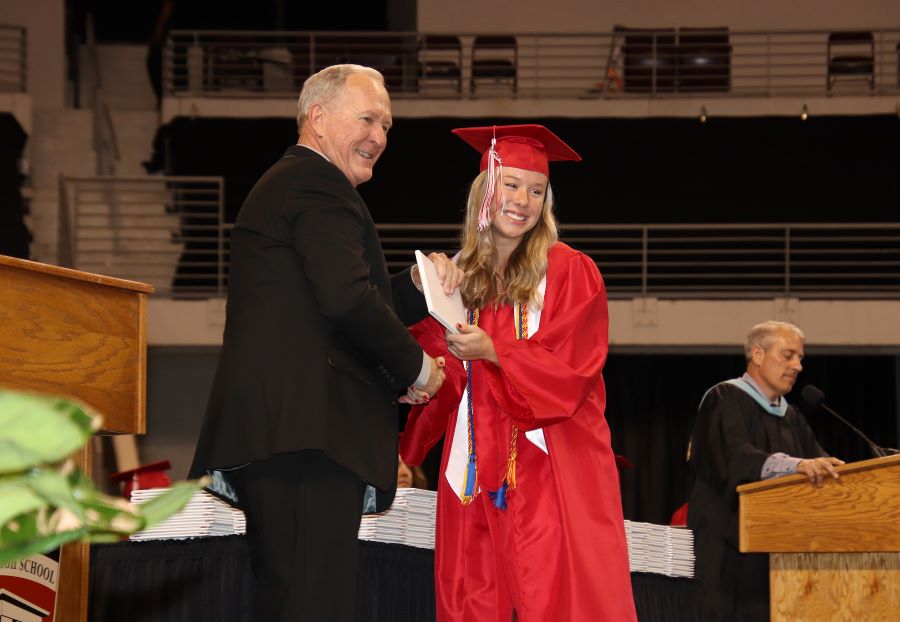 Mr. Hawkins along with his assistant principals called students on stage while Cabot School Board President Joe Trusty presented students with their diplomas.

Following the changing of the tassel by Mike Verkler (CHS Class of 1976) and alma mater, Mr. Hawkins presented the Class of 2022! Congratulations!