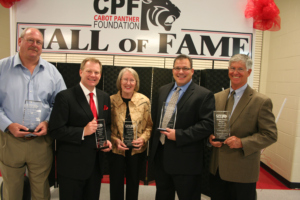 The 4th Annual Cabot Schools Hall of Fame banquet sponsored by the Cabot Panther Foundation was held last week and inducted five new honorees into the Hall of Fame.

The Cabot Panther Hall of Fame was created in 2008 to celebrate the successes of public education by honoring talented graduates of Cabot Public Schools, as well as local leaders who have provided distinguished service to influence public school excellence.

Tom Brannon is a 1985 graduate of Cabot High School, Mr. Brannon knew he wanted to have a career in weather after a tornado (1976) destroyed all of downtown Cabot.  After graduation, Mr. Brannon received a Bachelor of Arts degree from the University of Arkansas, Little Rock and a certificate of Broadcast Meteorology from Mississippi State University.  Mr. Brannon joined Today's THV in April 1996 as a weekend meteorologist.  Two years later he joined B.J. Sams and Robyn Richardson as co-anchor of “Today's THV This Morning,” which has become Arkansas' most popular morning news program.  Mr. Brannon volunteers his time working with charitable organizations such as the Arkansas Food Bank Network, Special Olympics, and “Stuff the Sleigh.”

Brig Gen Shelby Galen Bryant is a 1964 graduate of Cabot High School and continued his education at the University of Arkansas, where he graduated with honors and received a Bachelor of Science and a Master of Science degree in Agriculture.  His military service began in 1968 when he enlisted as an airman basic in the Arkansas Air National Guard.  He was commissioned a second lieutenant in November 1968.  After completing pilot training in 1970, Gen Bryant completed pilot mission ready training for the RF-101 A/C reconnaissance fighter aircraft.  He was an RF-101 instructor pilot until 1975, when he became the chief of mission development for the 189th Air Refueling Group.  He served as operations officer and deputy commander for operations of the 189th Air Refueling Group before becoming vice commander of the 189th Airlift Wing in November 1988.  He served almost eleven years in that position before being appointed Chief of Staff of the Arkansas Air National Guard in 1999.  He was promoted to Brigadier General on March 2000.  In addition to his Chief of Staff duties, he was named the first Joint Force Component Commander when Joint Force Headquarters-Arkansas was formed in October 2003.

Gen Bryant has also earned numerous awards and recognitions during his military career.  Gen Bryant is now retired from the military after over 40 years of service.

Steve Burks grew up in Cabot and is a 1971 graduate of Cabot High School. At an early age it became obvious that Mr. Burks was a gifted athlete. Not only was Mr. Burks gifted with athleticism, his brother, Reagan, was an Arkansas Razorback under Frank Broyles. Cabot was a recruiting stop for most of the top college coaches in America. During Mr. Burks' senior year he won the state decathlon breaking the record that held for many years. Mr. Burks was the Arkansas Democrat Athlete of the Year and was the 1970's version of the former Razorback, Matt Jones. Mr. Burks was three years all county in basketball, all state and all star in football, all state and all star in baseball and was drafted by the New York Yankees. Mr. Burks spent his collegiate years at Arkansas State as a quarterback. He tied the all time touchdown record in a single game with seven touchdowns and is still the all time ASU scoring leader. Steve was drafted by the New England Patriots and played three years as a wide receiver.

Dr. Sam Jirik is a 1978 Cabot High School graduate and continued his education at the University of Arkansas, Little Rock where he received a Bachelor of Science degree in Health Science.  Dr. Jirik received his Doctor of Dental Surgery from the University of Tennessee in 1986.  Dr. Jirik has practiced General Dentistry in Cabot since 1986, specializing in implant, cosmetic, and reconstructive dentistry.

J.M. Park (1930-2011) was a 1949 Cabot High School graduate and a 1953 graduate of the University of Arkansas.  After his service in the United States Army in Korea, Mr. Park returned to Cabot where he began his career with the Bank of Cabot.  He worked at the Bank of Cabot for 41 years where he rose to the position of President and Chairman of the Board before retirement in 1996.  Mr. Park took a deep interest in his community, serving on the City Council, Cabot School Board (19 years), Cabot Chamber of Commerce, Cabot Water Commission, Lonoke County Safe Haven and the Cabot Lions Club.

In honor of his community service, Mr. Park was elected three times as Cabot's ‘Man of the Year.'  His service extended to the larger community of Arkansas.  Mr. Park served on the CARTI Board, the Arkansas Student Loan Authority, the Arkansas Independent Bankers Association and the board of Home BancShares.  He was also the founding director of the Arkansas Bankers Bank, serving as president of its board at the time of his retirement.