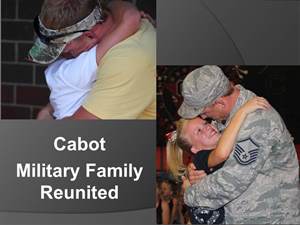 For 12-year-old Masen and his 10-year-old sister Abigail, it's been a long six months.  It's been hard on their mother, Stephanie Wade too.  Wade is a teacher at Cabot High School.

On Thursday though, the wait ended and the surprises began when MSgt Jeff Wade returned home after being deployed to Qatar for the past six months.

The first surprise reunion took place at Cabot Junior High North.  While Masen was enjoying a visit from mom, his dad surprised him at lunch. Masen had no idea his father was back home.  It was an emotional reunion for father and son.

Emotions also ran high when Abigail was reunited with her dad.  Her surprise took place later that day at Cheer City United.  As Abigail was in the air helping demonstrate a stunt, her father ran from behind and caught her in his arms.

MSgt Wade says it's always tough being away from his wife and kids, but he's thankful to finally be home with his family.